After my long weekend at home in Tri-cities I returned to Portland to sublet Rory's apartment. To cheer myself up I painted my nails. Only on my left. That helped me write, oh, about the first 5 pages of my initial draft. 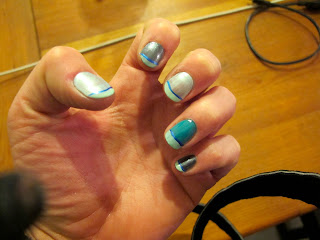 But in order to actually get the ball rolling I had to go to the beach.  Because I hadn't been before, I decided to visit the Oregon Coast Aquarium in Newport. And look who I found! The fattest great white model I've ever seen.  There were also huge megalodon jaws that I somehow forgot to take a picture of. 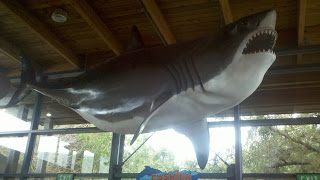 These jellies were more fun to watch than just about anything in their lovely blue enclosure. 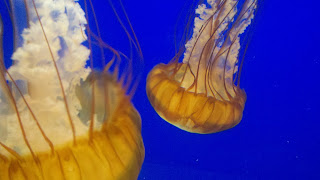 This lil guy was smaller than my phone. 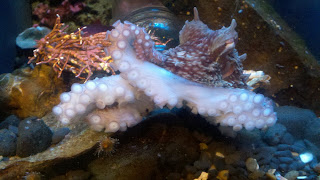 But these were the stars of the show.  The Aquarium has three huge tunnels one can walk through where things swim all around you.  Of course, I was most interested in the Leopard Sharks, who proved remarkably difficult to take stills of. 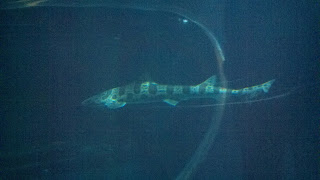 I did slightly better with video, and this is also the lighting effect I'm imagining, though slightly brighter, to have in 301.

(The little kids voices are also pretty great).
I've become very excited by these heavily patterned, very long, skinny sharks.  I think they will work perfectly for the project, since they aesthetically challenge what people think of when they think "shark."  Folks generally think great white, right?  But these svelte, almost triangular creatures are just as much sharks, right? If I say so?

Being at the beach was fantastic, because thoughts are just so much easier near sea level. And I've now caught up to the Shark BBQ place I left off on over a month ago!