I'm supposed to write about the Whitney Biennial catalog from 2008 for my 1st paper this semester.  I thought it might be edifying for myself, after writing the paper, to look back at my first impressions of the artworks presented, as if I were walking around a show of these works.  So, starting at page 90 of a 290 page book (Not going to give the first 20 or so indulgent black and white images any more space here, and I haven't suffered through any of the essays except the initial introduction, where you'd think that organizing the Whitney Biennial was one of the most exhausting endeavors on the planet, the organizers heros worthy of medals of honor...)-
Awkward adolescent drawings/collages reminiscent of comics.
Poorly exposed photographs of Mexico.
Stills of video installation and floor posters misinterpreting the four humors.
Art world referential installations and performance.
Brightly colored collages implying bodily malfunction.
Paintings of the Bay Area, devoid of people.
Artificial waiting area complete with bleak, monochromatic photographs.
Fancy beaded curtains, another interpretation of the artificial waiting area.
Monochrome canvases made to look like vintage computer characters.
Retro posters and another waiting area.
Retro memorabilia of a performance and offset garbage.
Video stills of an unattractive white man with "Man Who Fell to Earth" contacts in.
Garbage suspended in resin or made into rectilinear structures in some way.
Unfinished room with found objects, a bunch of drawings and 200 speakers.
Xerox, words and symbols.
Viking wig plus cheese video stills.
Photos of words in landscapes.
Comic book referential text coupled with collage, questionaires and targets. Political.
Photos about boats and fashion.
Stills from 16mm of African Americans, guns and slums.
Video still of camera set up of scene featuring American army in action.
Minimalist photos of taut fabric.
Video stills of torture
Kenneth Anger-esque collage.
2 channel video stills of men in the landscape.
Architecturally referential quilts and grids made from fig newtons.
Photos of buildings taken through gels, or overexposed.
Braids.  Ugh.
Images of utopian projects.
Fake Chocolate Louise Bourgeois with slimfast can, collection of photos of sculptures and chickens on pedestals.
Paintings about photos and paintings.
Paintings of melting grids.
Wooden boxes with ink blots and collage images.
Formalist steal and glass sculptures, some on concrete pedestals.
Grainy film stills of homosexual acts in a white on white bathroom.
Bad paintings of trite subjects.
Shiny sculptures in geometric shapes.
Rectilinear sculpture that seems to exist to ask the question of "how does this hang on the wall?"
Spike Lee.
Grids and gilded deer skull.
Paper mache and photo's of ducks interacting with debris.
Performance documentation featuring the foetal position.
House. Wood panels with Text. White room installation.
Fun with Lumpy buildings.
Sewn black vinyl.
Video stills of artist and architectural model view.
Video stills involving kodachrome nostalgia.
Minimalist photo stills.
Room installation of notes on a fabricated cosmology.
Memorabilia of Neighborhood Public Radio.
Fun with rebar in a grid accompanied with Fun with rebar, palettes, and concrete.
Memorabilia of an experimental music work.
Fun with cellophane, plywood and concrete blocks.
Home Made Kabuki.
Wood scrap, booklet.
Speakers, custom furniture, wall text.
Lantern and black and white photos of no meaning in particular.
Black and white sculpture using balloons, bread, 2x4's, chains, and referencing Noguchi.
Installation of a trashed workshop, vaguely referencing the high-tech.
White tree and reclaimed glassware full of water.
Neon text.
Girls and Guitars.
Dismantled Mantles.  Hah, that's funny. And images of Macrame.
Video stills of Women in white puritan outfits, shot through odd lenses.
Fake wall frames.
Works referencing food production and traditional pottery painting.
Centered photos of mirrors and beer.
Disturbing mixed cultural photos from a 16mm film.
Aesthetic use of architectural materials on a grand scale.
Stills from a very dark looking high def video.
Purposefully bad photos parodying the college experience.
Ugly sculptures using mud and found objects.
Clever use of xeroxes, projectors and limited palette.
Same limited palette, rolling walls with prints of hexagons and text, performance using Eames chairs.
Grainy videos of human cannonballs.
More monochrome photos in artificial waiting rooms.
Still from videos and installations parodying artist's role in society.
Video relyling on text.
Artificial landscape.
Photos about color.
Artificial museum about the movie Scar Face.

OK, after that exercise, what I've learned:
*The representative photos don't carry the works very well.  Surely, the works must have been more moving in person.
*Conceptual work relies, I realize, heavily on the explanation placards beside it. Which explains why at least a quarter of each layout is devoted to artist statements/ explanations. Without them the works make no lasting impression.
*Video work, specifically video captures of 16mm, were really hot 5 years ago. Only 1 person made the leap to hi-def.
*Nothing looked like fun. I feel like I just sat through a very serious, bleak movie.

Posted by molly painter, esq at 3:16 PM No comments:

There were a lot of interesting moments at 610 this time, but this was my personal favorite.  After having walked a couple miles on a hot Boston afternoon, where not one single person smiled at me while I was carrying a large batch of balloons, I tied these all together and let them go!  To me, they resembled a hedgehog, and comforted me all week long. Really, the only work I'm interested in working on right now would have to include lots of helium filled balloons.  Counting the days till payday....
Posted by molly painter, esq at 1:46 PM No comments:

Why i Love Jerry

I've been turning a lot of folks on to Mr. Saltz lately.  (Yeah, I live on the West Coast) This one gives me hope, especially.
Posted by molly painter, esq at 9:00 PM No comments: 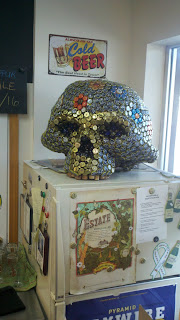 Aw!  It looks so small!  So, I'm standing on a stool, looking across the bar to take this cell-phone shot. And VERY HAPPY to finally have this work at the local "West Richland Beer and Wine Store."  Gotta love the name, right? Classic!  As is the incredibly well-lit atmosphere. This isn't a "bar."  It's a convenience store with a keg problem. 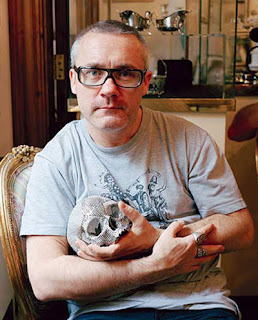 And that's the thing-  I'm proud to have this work sitting on top of the refrigerator.  Is that so wrong?  The first day I brought my cards in the tendress took one look and said "For the love of Beer?" without asking me the title. (which, for the original, was accurate.)  So, yeah, I found the only other Damien Hirst fan in town.

I've been trained, over the years, that no one likes a show-off. And thus, I have also taught myself not to start conversations about my art with sentences like "Similar to Damien Hirst's 'For the Love of God'..." But, apparently, that is what is expected.  I'm doing my best to wrap my ego (much thinner than people would think) around the concept that it is not only alright, but actually expected, for artists to name-drop their betters, shamelessly.  I've always thought it was incredibly alienating and gauche.  Shows what I know after 7 years of artschul!
Posted by molly painter, esq at 3:49 PM No comments: