I heart my go pro!


The first video, if all this works, was taken last weekend in my driveway. The 2nd was made by my friend Lesli Larson (http://www.archivalclothing.com/) who I hope will be my mentor next semester. This was back in December 2006, when the ball was only about a mile long.

So, I bought a Go Pro Surf Hero back in October, and I'm finally getting the hang of how to use it, now that I've bought a chest mount, supplemental cards, backs, and cases. You'd think a camera designed to be used on a surf board wouldn't be too finicky, but you'd be wrong. Anyway, the purpose of getting the camera, besides for the obvious reason that it could be fun, was to document the attempt to break the worlds record for fingerknitting. Which I did not break, but the footage is fun anyway. I uploaded a short out-take here, but I should have something looped in time for the residency.

I made 2 attempts at measuring, and documenting measuring, the new, big ball. The first was on a dirt road and was aided by Matt Causey, and used 3 different cameras. The 2nd, more accurate was shot exclusively by me and used just my Canon and the Go Pro, and was taken at the local softball championship field park. And, after 2 attempts I am now sure I 'm about a kilometer short of breaking the record. I can fingerknit about 5 meters an hour, so... about 200 hours of fingerknitting to go! Residency should be great for this! Hopefully these videos will help me with my goal of applying for a Kickstarter project granty type thing.

Every time I have to re-roll the ball, since all together it can't fit through doors, I roll it into about 5 pound balls that then have to be re-knotted into the big ball for measuring purposes. They are currently residing in the back of my pick-up since I have nowhere for them to go! The ball, when rolled up, is too heavy and awkward to load into the truck by myself. Rolling it out takes upwards of 3 hours, and rolling it back up takes even longer. I used to have a kid that I babysat who loved to unroll the ball all over the house.

Unfortunately this does mean I won't have the record by Christmas. As usual, everything takes twice as long and costs twice as much as what I anticipated...
Posted by molly painter, esq at 4:24 PM No comments: 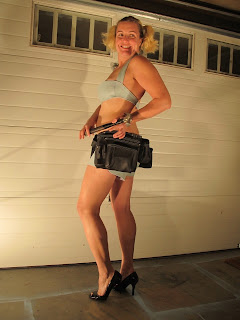 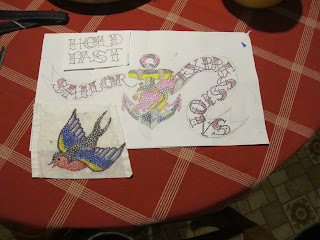 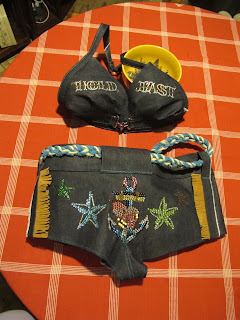 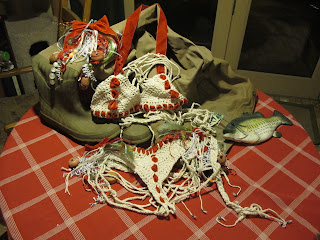 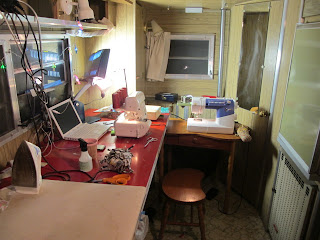 Ok, so I know my last blog was a downer, and that it was far too long ago.  Eventually I broke through the general malaise and started making (logical, I know) bikinis not meant for swimming!  Something absolutely no one needs ever!  I included a shot of my sewing studio-  Meet my new to me 1971 Aristocrat trailer!

Anyway, the bikinis are (from top to bottom) the utili-bikini, all leather all the time!  The bags are found, but perfect for this scenario and remarkably comfortable.  This is the one functional bikini- as some of you may remember, a bikini is my preferred work wear.

Secondly there is the Proud Heritage bikini- inspired by the Cowboys, Sailors and Indians that nest in my family tree.  This was my first experiment with the heat transfer rhinestones- incredibly expensive way to work, and the little buggers just won't adhere properly. I included my preliminary drawings, which turned out to be too detailed (though the swallows did make it onto the front)

3rdly is the Shark Kill bikini, inspired by a story about shark kills off the coast of Texas.  Over 3,000 sharks were killed in a single loose gill net.  And, in abstraction, that became a string bikini, complete with bizarre and complicated bows and net closures.  And then there was this bass and some great old school waders and and and....

Trying to think of how to show these on or around cubicle walls is not working for me.  So, first of all, I'm working with an illustrator to turn them into pin-up style calendar images.  These are the first test of this idea-  all the photo scrap are as equally cheesy as the garage shot featured here.

<(I'm currently watching the hooters bikini challenge at a coffee shop that has free internet, and I'll admit it's distracting me.)>

Anyway, I'm not sure how many more bikini's I'll finish, but I'm thinking certainly 2 more.  Ill be better posted, I promise.