That their stuff is S*** and your S*** is stuff?
http://www.youtube.com/watch?v=MvgN5gCuLac

I understand that a lot of Occupy participants have been quoting Carlin of late, so I thought I would as well.

I have been suffering from just about the worst art block of my life. Because, partially at least, I can't stand to think of creating more stuff. Any more stuff. My rallying cry of late has been "NO MORE STUFF!" Even as I have ideas that I tinker around with how to make (in my head, mind you, because all of them require materials I would have to go buy with money I don't have), it feels like the idea should really be all that's necessary. The actual thing shouldn't need to exist. How do you make that a physical object exactly?

The overwhelmed effect is being squishily compressed by the fact that I'm hanging out with a guy who spends as much time on the internet in a day as I do in a week, or maybe more. And the internet is full of stuff. And, of even more interest to the guy, stuff about stuff. And people moving stuff around and taking referential stuff from other stuff, sometimes using a computer or a gadget to rearrange that stuff (Carlin on Gadgets also comes pretty highly reccommended). And as intellectually stimulating as his and my conversations are, the onslaught, which I know he is keeping to a minimum, is like being poked with a sharp stick. I feel like a tree snail pulling shut it's door, retreating ever further into it's shell, very much in danger of retreating so far as to lose hold on this thin branch of shared (sharable?) experience.

I did not grow up reading the newspaper or watching television. Instead my mom and I would drive the same route to school (about 10 miles) that we still drive almost everyday, listening to the same radio programs (Morning Edition, All Things Considered, and Fresh Air.), which, let's face it, talk about the same things over and over again. As a result almost all of my media interactions have been those that are repeatable or repeated. I'm not using this as an excuse, but more to show that as things have entered my realm of understanding (physical things as well as ideas) they have been allowed to grow and change in a very slow, almost seasonal sense.

This new paper that we are supposed to be writing about our research kinda baffles me for these reasons. Not only do I not know what I'm really working on right now, but also I don't think about things in an automatically responsive way. I'm reading a book on art crime, but there's no chance I'm going to make work about art crime this semester, or if directly ever. 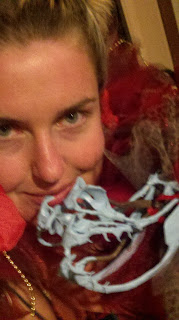 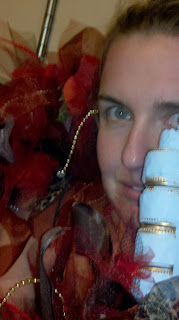 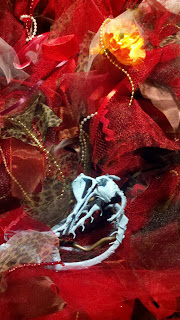 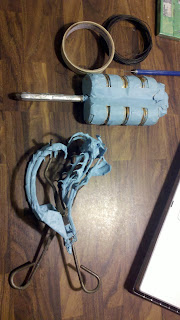 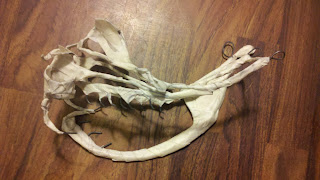 So, for the last week I've been working on what might be the first (completed) piece I bring for the residency. This is my fancy new Quetzalcoatl boa! (Please excuse the quality of the pictures- My mom can't hold a cellphone steady to take a full body shot for scale. Let's just say the details are small, but the entire piece is, well, fluffing in at about 8 feet long.)

Quetzalcoatl is/was an ancient Meso-American snake/bird god. According to the Wikipedia article- "Among the Aztecs, whose beliefs are the best-documented in the historical sources, Quetzalcoatl was related to gods of the wind, of Venus ((the planet)), of the dawn, of merchants and of arts, crafts and knowledge. He was also the patron god of the Aztec priesthood, of learning and knowledge." Also he's supposedly the god with the white beard who may or may not have been a conquistador and/or Jesus reincarnate according to the Mormons. Complicated creature, evidently.

However, this is me, and I happen to think the idea of a snake/bird god, possibly a similar to Hermes-style intermediary between the Gods and us, is just COOL. I've been tinkering with the idea of a sort of puppet accessory for sometime, and this form particularly lends itself to that. I had been envisioning adding more vertebrae into the interior structure, but I decided against it as it would effect the drape too much.

About two years ago, maybe 3, I came across the Llorona video excerpted here. I was already familiar with the Quetzalcoatl story, and blown away by the music. I also really like the clouds hanging from puppet strings, and may have to steal that idea at some point as well.

Boas (and, coincidentally, tutus) were the first thing I've learned how to make via You Tube. They require quite a lot of time in front of the T.V (Father Goose, Kiss Kiss Bang Bang, Pirate Radio, Two for the Road, Wait Until Dark, 1st 2 Episodes of Life in Cold Blood, 1st 2 episodes of Blue Planet....), and quite a bit of the living room (as you may get to see if I can get the picture to load...).

The skull is made, as you might be able to figure out, from masking tape and wire, and made controllable with an old set of test-tube holders. It isn't exactly true to form, but the important parts (fangs, sinuses, jaws) are all there with some degree of accuracy. The rattles, similarly, are from a silver butter knife, Mikey's caps, bells, and more masking tape. I find masking tape to be one of my favorite media...

So, for those of you paying attention, a while back I was thinking of making lots of boas to wrap around people... Still thinking about it. Making these gaudy, fluffy things is extremely rewarding, if time and financial asset consuming. This one included masses of ribbons, about 16 yards of tulle, flower petals sewn onto ribbons, fake poppies, 8 colors of plastic beads, rick rack, scrap fabric.... and it's gorgeous, I love it. But now that I have it, I'm not sure I really needed it.

That, I think, is a blog-post for another time...
Posted by molly painter, esq at 7:50 AM No comments: 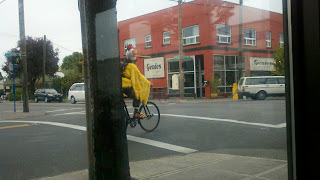 It's been one of those Portland days where you can't tell what time of day it is because it's completely overcast. Add that to the fact that I have no west coast teams left to care about for the rest of the season & I'm not attending Hardly Stictly Bluegrass...

And then there's a man on a bike in a chicken suit! Hooray!

Ok, the 2 things I did like at TBA were Rude Mechs "The Method Gun" and Andrew Dinwiddie's "Get Mad at Sin." Both of these were, actually, pretty traditional seeming theater pieces, in our odd American theater traditions.

Rude Mechs is a collaborative theater group out of Austin, and really what the performance was was a beautifully choreographed, manipulative one act play. I had been having a discussion earlier in the week about all the gimmicks that bore me about contemporary theater. Audience participation, breaking the 4th wall, senseless nudity for shock value, discussion of an audience's role to make them feel like part of the action... All these things that often are no longer provocative if you've seen much theater.

I also talked about the over-use of the standing ovation- how everyone gets a standing ovation just for going on stage these days. I think it's caused by a combo of the American Idol phenomena and also that we, as a culture, seem to want to encourage people to have high self-esteem. It's a strange audience "do unto others as you would have do unto you" thing.

Anyway, I wasn't ready to eat my words, and they were forcibly rammed down my throat for the entirety of the performance, right through the moment where I jumped out of my seat to applaud. There was a great dance scene involving a role of packing tape that was wonderful, as well as a well-used paper-mache tiger, who I think I have a crush on. Anyway, this work is still touring, so I feel like I shouldn't say more. But if you're in Austin, or anywhere else these guys perform I'd highly recommend it.

"Get Mad at Sin," was a supposedly pitch perfect rendition of a sermon recorded by Jimmy Swaggart, an early tele-evangelistic type. &, as someone who hasn't had a lot of experience watching such sermons it was really just eye-opening it its strangeness. I know a lot of folks who found it offensive- I just found it like a relic of another era. A far gone era. And that's what made it interesting, that it was a historical document made fleshy. Maybe it wasn't standing ovation worthy, but it was damn interesting and really well made.

Both works, actually, were remarkable in their professional-ness. It was easy to trust these performers, to run away with them, because they so clearly knew where they were going. Unlike most of what I saw at the festival, these people were, well, rehearsed. And it was a relief. As interesting as it is to watch the human-ness of, for example, Sue Koh, somehow I'm beginning to appreciate the control apparent in directed performance.
Posted by molly painter, esq at 5:20 PM No comments: