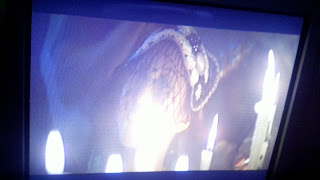 Two great ones relating to science fiction, but could just as easily apply to artistic ideas...

...a term Darko Suvin adapts from Ernst Bloch and defines as "a discrete piece of information recognizable as not-true, but also as not-unlike-true, not-flatly- (and in the current state of knowledge) impossible".[97]Suvin, Darko (1979) Metamorphoses of Science Fiction: On the Poetics and History of a Literary Genre

...a great many ((artists)) writers and critics have based their entire careers on the premise that anything that the general public can understand without mediation is worthless drivel. [...] If everybody came to agree that stories should be told this clearly, the professors of literature would be out of job, and the writers of obscure, encoded fiction would be, not honored, but pitied for their impenetrability."[98] Card, O.:Ender's Game, Introduction
Posted by molly painter, esq at 1:03 PM No comments:

For nearly the last week I've been chilling at the Oregon Coast and immersing myself in a study of sci-fi. This time of year the weather alternates between hail, rain, burst of sun, and grey, so there isn't a lot of reason to go outside. Instead I've been sitting on a courderoy couch, fingerknitting like a fiend, while my friend Andrew curates the basics.

Today it's Blade Runner... and then there's going to be a little break...

Anyway, what has been kicking around as an idea is how science fiction seems to rely on the misunderstanding of science as the fulcrum on which the story turns. That's where the anxiety comes from. Not quite sure where to go with the rest of that observation.

But in the meantime I read the old issue of Nature that was next to the toilet in the bathroom here in the house of a chemist, and found this article titled "Governance and Environmental Change in the Arctic Ocean" (April, 2009, that had this beautiful map graphic. Perfect sci-fi plot- How witll the Arctic be divided politically after there is no more ice?

And I've been out watching the seals. Which are just so much cooler than anything that can fit in a television.
Posted by molly painter, esq at 8:26 AM No comments: 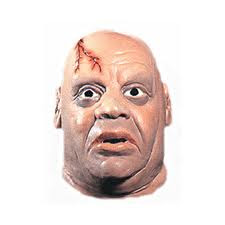 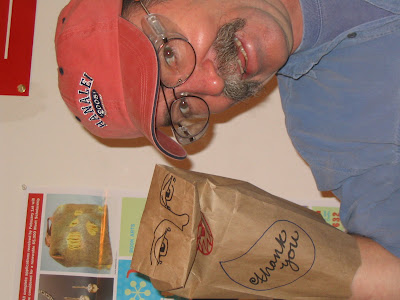 Michael is a woodshop teacher at my Alma Mater, Oregon College of Art & Craft. I came across this picture of him working at a National Portfolio Day where I was incharge of packing lunch bags many, many years ago. Which led me to his website, which led me to think about how much I miss finely crafted things, which made me want to share that with all y'all. I also miss paying attention to such small details as the bags the sandwiches are coming in. Right now I'm overwhelmed by not having time for details.


I think I'm having this particular craving because of watching Plan 9 from Outer Space last night, followed up by an amateurish 1991 documentary that accompanied it on the dvd (the documentary was actually longer than the movie). However, that led me to learning about Don Post, the original maker of the latex mask (no only this mask of Tor Johnson, but also the faces from HellRaiser and Halloween, etc.) Even when I'm not expecting it I find something amazing.
Posted by molly painter, esq at 3:02 PM No comments:

So, I just finished the final draft of my first paper, about 2 days later than I wanted (I'm having to rush, since I might be getting a REAL JOB! come April...). Tomorrow I will get up, go to the fast-streaming coffee shop with the cute teenage boys who serve me endless coffee for about a dollar, and finish up the bibliography. For the first time I have far too many sources to be resourceful, did way more research than was actually necessary for my pseudo-thesis. So it goes!

These vids (presuming they load) were integral to my thinking, even if only a quote from the 2nd made it into the paper. Don't you wonder what I actually wrote about?

Time flies. Anybody have suggestions for monster movies? That's the next overwhelming subject I intend to tackle...
Posted by molly painter, esq at 8:33 PM No comments: 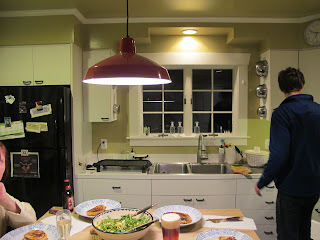 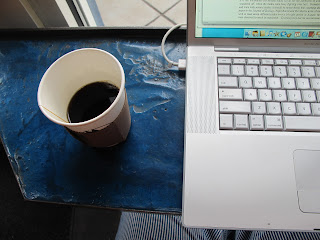 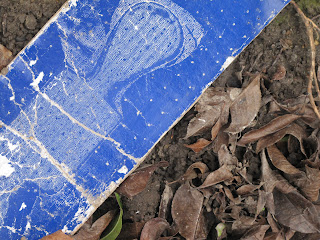 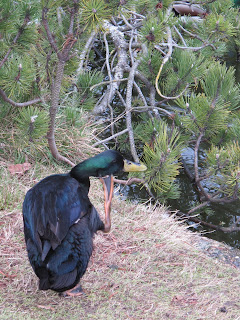 So, I've been remiss in my bloggin'- I would say I've been sickly, which is true, but uninteresting. You can check my other blog for that. ANYWAY- These are images from Seattle almost 2 weeks ago- remember when I was obsessed with that blue color? So, these are the images I made that day, plus the not so great documentation of the 2nd of the "Traveling Tuna Tuesdays," complete with Pam, Michael, and great beer as well as a smashingly lovely red lamp.

2 things, actually, in that last picture I would like to draw your attention to (besides the lamp and the beer) would be the oxo salad spinner (which I still don't really know how to work) and their very fancy sandwich grill. I've decided part of this project (shoud I ever really turn it into something) will be the study and documentation of the wonderful things you can find in other people's kitchens. I really need to be a bit more scientific about it all. But what's nice is that I can replicate these sandwiches basically most places. Especially if I can find a Trader Joes. And also necessary is the IPA.

Anyway, there are more things to catch up with. Hopefully soon they will actually be more, er, um, art related...
Posted by molly painter, esq at 8:57 PM No comments: 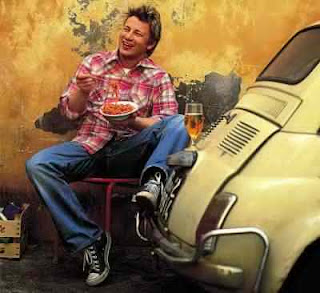 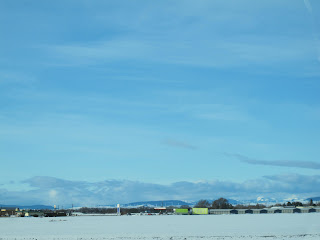 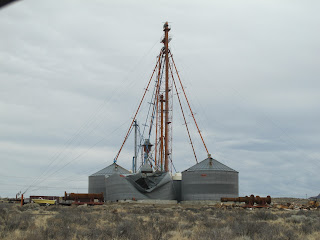 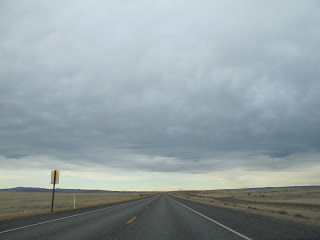 I really am using this blog to muck about when I can't seem to be making sense in my research. Also, since I've been traveling there hasn't really been much of a chance to do anything except stop and take pictures. I have no budget to actually start on new works anyway. So instead here are some images of the inversion (among other things...). I've been thinking of naming the inversion. Anyone have any ideas? Harold the Inversion? Oscar the Grey? Yes, I did take 2/3 of these at over 70mph on the way to Seattle. I have no idea what could have crushed that silo-type thingy, there wasn't anything around that was obviously broken or fallen from the sky.

I've used the color "sky blue" in my work off and on over the years. At the moment, partially because I feel like my blue sky exposure is so limited, I'm almost hungry for that brighter blue color. Any sort of greyish blue makes me sorta antsy, and any sort of greenish blue reminds me of the sea, but all the bright blues remind me of the sky.

I've also been watching Jamie Oliver cooking shows, specifically "Jamie Oliver's Food Escapes," in which the celebrity chef does things like cook freshly killed tuna over a pit dug into the beach sand in Greece, or makes salad out of the home grown greens of an Italian jail. His general philosophy of buying fresh, local, artisan goods and then serving them up as simply as possible does appeal to me. But really it is his ability to, and propensity for, cooking anywhere that is keeping my interest. He's clearly a performer, but comes off as being more of a comfortable teacher then a razzle-dazzle man. He uses the same tools/props in almost every episode (same cutting board, same knife, same bowls), and they become almost like old friends. Very refreshing.

Anyway, not that I could find images of this on the internet in my perfunctory search, but there is a lovely blue that runs around the credits. It's not the bright sky blue I'm craving, but more the twilight blue over the Greek ocean. It's coincidentally the color of blue in the Swedish and Greek flags, and also the blue of the domes of Greek chapels, and the blue of the fresco sky behind the Medici 8 pointed stars in Italian cathedrals. Lovely bright, but twilight bright, blue.
Posted by molly painter, esq at 6:51 PM No comments:

So, I picked a beautiful place to read the rest of Claire Bishop's October article "Antagonism and Relational Aesthetics," didn't I? This is the ceiling of Suzzalo Library on the University of Washington Campus.

Ok, so, as far as I can snuff it- Relational Aesthetics began as a course of study in the 1990's (we're already so twenty years ago), and basically consists of people luring other people to galleries with the promise of social interaction. My logical question is- Is it the gallery that then makes this art? Because I love luring people to places, just generally the place is my own house, not a reproduction of my house in the NYMOMA (as Rirkrit Tiravanija has). I have had most of my profound interactions with art NOT in gallery settings, and believe that in order o actually be art things have to exist without the white cube (even though I love the white cube, and would love to waste my time there as frequently as possible). So, as my course of inquiry seems to go- Yes, hosting dinner parties is an act of art making. And apparently not of performance art, but of a sort of propostional art (I propose to cook thai food for you, and the act of you eating fulfills the artiness, therefore I am not a performer...).

Actually, the best part about Claire Bishop's article was her implication of this style of art making as being inherently political, which I completely agree with. There was also discussion of the term "micro-topia" which I positively love. Hereafter, I proclaim myself to be a creator of Micro-topias- little communitiy spaces induced by my will with the purpose of serving sandwiches. Isn't it great to have meaning?

what a bunch of bs!
Posted by molly painter, esq at 2:50 PM No comments: