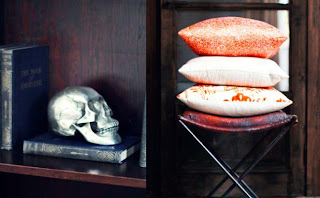 So, can I put some bottle caps on that for you?

Apparently it's awesome to have silver fake monkey skulls to accompany your throw pillows, which is totally something I agree with

I already think Justin Timberlake is going to be one of the most influential people, like, ever, but it was this quote that made me fall  in love "I do love a stripe."  Apparently he is branching into interior design, starting with pillows, and adding dishes later in the year.  www.homemint.com if you want to sell your facebook soul in order to have Timberlake and a designer named Estee Stanley give your life meaning though interior decor.

I may be sounding bratty, because I just got off work and I don't know if I'm going camping tomorrow or not, and the coffee shop decided to close an hour early, and the beer store isn't open because it's Monday, even though it's my friday... But, actually, I completely agree with the idea that the home is the place that art and design actually matter most.  Screw museums- if you won't live with my work than you don't really love it as much as I do.

Ok, gotta label some caps before they kick me outta here...
Posted by molly painter, esq at 7:30 PM