How We Disassemble, Part 1 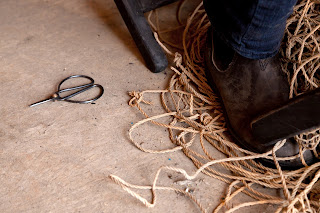 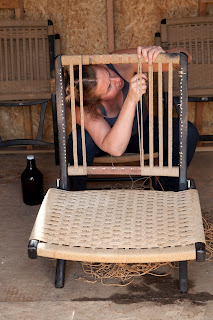 I started thinking about how the hell I'm going to ever get my dream residency, and finally have submitted to the force of documentary videos.   Shot with my Go Pro because my Canon was fritzing.  However, these lovely stills were shot by my mentor (Lesli Larson, archivalclothing. com, who sat in the shed and hung out with me for quite a while (2 hours? 3?)).

I set this up originally as a drinking type game (tie a knot, sling back some tasty White Bluffs IPA from the gallon jug), inside the shed that I was set to move on Saturday.  I am taking apart some patio chairs that had begun to break down a couple of years ago.  Originally the chairs belonged to my grandparents, so they reek of cigarette smoke.  In the first part of this series (over 8 hours of footage, I believe), I remove the woven areas that were already breaking, tying the bits together, and then winding them into a ball while sitting on the foot hassock (still intact) from the set.  Next will be the slicing and removing of the rest of the jute, and I have no idea where I will shoot that (since I would like it to stay this sort of spare color environment, so different from the rest of my works...).  After that it will be the removal of the little shiny nails and the hinge hardware.  And last will be the breaking apart of the frames.

I have no idea what to do with any of this- it's just something to do, really.  I want the ball of jute as one of the many in a collection of "useless things made into balls" that I've been creating for years. But the nails, hinges, and wood?  no clue.

I've been thinking of these videos as being a series on Sisyphusian tasks, all resulting in different balls, or something.  Really, I haven't been analyzing the whole thing as much as I could.  Just making making making...