...there is very little chance that I actually would have gone to craft school.  I would just stay home and watched youtube videos.

So, I have the problem that the shark is looking too much like a bad museum diorama.  Not only do I not like that it isn't a GOOD diorama, but I also don't want to encourage folks to beat up on museum diorami. 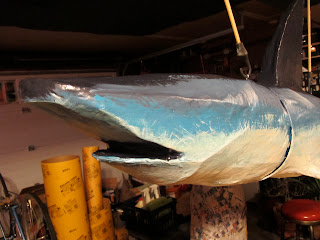 Personally, I liked it more before it had eyes 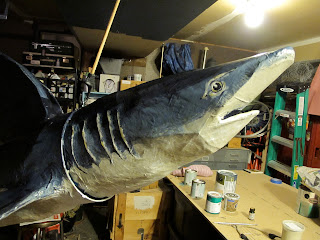 But it was also gratifying today when my mentor reached out to touch the gills and she thought there would be ridges there.

Tonite I take on adding a surface treatment more like the fringe featured in the video.
Starting with the tail and working forward. With beer, Kyle Durrie and Rory Sparks.  Always good to surround oneself with sexier, more experienced paper artists, just in case you need them.  Also, they'll be doing fancy, for-profit work.  With, you know, clean hands and such...