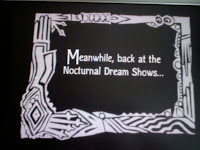 "Having no talent is not enough."

I like the idea that there are west coast phenomena. Apparently the Cockettes, a drag show based out of San Francisco in the late 60's early 70's was a West Coast thing, terrible to transport east. In this era drag could include women and even children, you could still get furs at the local thrift stores, and the commune system was almost working to keep everyone fed and clothed,(with help from the welfare system). Drug induced, frenzied, improvised shows were greeted with standing ovations. This is the San Francisco that dreams are made of.

As I was watching the documentary (that was very similar in style to those that you'd see on PBS, but with a lot more cock and balls), it suddenly occurred to me that as they were describing the wonderful and free Haight district of the era they casually left out that Charles Manson was also active at the same time, and under much the same pretenses. He was an itinerant musician, surrounding himself with pretty girls in outlandish hippie garb, espousing a gospel of free love. An interesting contrast.

I really enjoy the act of making feather boas. Watching these movies where so many people need comfort and protection, as they act out against society and each other, I wonder if I need to make a labyrinth-like honey comb structure to protect all these fragile creatures. I think of Aunt Beast from Wrinkle in Time, and how beneficial a costume like that would be. But then I watch for awhile, and realize that is would just get sullied and burnt to a cinder. All these characters may be fragile, but they are also quite inflammable.
Posted by molly painter, esq at 8:01 PM