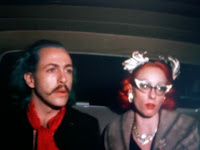 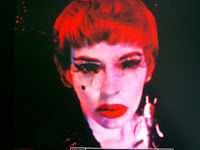 So, sometimes I draft these posts, and then something goes wrong with whomever's computer I've dredged up to use, and the damn things never get published! Quelle Domage! Anyway, this is the first of apparently 3 of those posts...

Recommended on that lovely list of things I had to look up were the movies of Kenneth Anger (Specifically "Inauguration of the Pleasure Dome), and also John Waters, (specifically "Pink Flamingos"). Being the obedient student that I can sometimes impersonate, I made it through both. I had to turn the Director's Commentary on, and occasionally poke myself, to stay awake, but I did!

Kenneth Anger does make amazingly odd, sometimes short, films. He has been doing so for something crazy, like 75 years. I am surprised I had never heard of him, especially since I have had to sit through class discussions of Matthew Barney's work frequently. It's pretty obvious watching "Inauguration" where the "Cremaster" B.S. comes from. A drug laden, sleepy man in heavy make up, swallowing jewels makes his way through a series of rooms and performs several tests. There are angry, transforming female characters, repetitive, obnoxious noises, dream sequences and overt sexual bizarreness. There is symbolism everywhere, but none of it seems to be exactly culturally referential, instead more imagined. However, this is very low tech, filmed in someone's house, and there's a wonderful integrity to it that I find lacking in "Cre."

I made it through about 11 of Anger's films, and by far my favorite involved a midget dressed in 17th century clothes running through an Italian water park. His wonderfully creative, simple film making could have used more editing, but was absolutely gorgeous. I almost wished pieces were run slower, and that I was just able to leave them on in the background, almost as still photographs rather than films.

The opposite was true of "Pink Flamingos," as anyone who has seen it possibly could attest. I have a lot of respect for John Waters. I love him in interviews, and think that his passion for making films can't be matched. But, as it was intended to, the film just grossed me out. As much fun as I could tell they were having making it, I really wouldn't have gotten through it without the commentary. Mr. Waters was constantly telling side stories that were much more fun than the actual film. One was about the trans-gender flasher,"Government would pay for your tits, but you had to pay for your snatch yourself," I believe was the quote, "And now she's living in the Mid-west, has a couple of adopted kids. Nice Girl! I wonder if she ever watches this movie..."