Do you understand any of this? 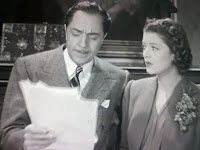 After I had finished with the prescription films and readings, I had Nick and Nora fest. I watched "After the Thin Man," "Thin Man Goes Home," "Another Thin Man," and "Shadow of the Thin Man," This image is from "Another," I believe, and is a great scene in which Nick and Nora are presented with Nora's estate's yearly estimates as a threat. Nora asks Nick "Do you understand any of this?" and Nick, detective and new father, tries to decipher something about a logging company, maybe? Their patter is so cordial, so civilized, and yet she clearly can tell that he's at sea. They arrive at the mutual conclusion that to protect her financial adviser is in both their best interest, but there is no argument. I thought with our country's finances being what they are, it would be good to look at an image from a depression era movie of 2 supposedly rich people not knowing what was going on with their finances.

Another wonderful moment comes in "Home" where Nick is lying comfortably in a hammock when Nora comes out to sit with him carrying a cleverly folding lawn chair. It's actually very slapsticky as she tries to carry on both a conversation with her husband, and figure out this complicated piece of furniture. Eventually she gets it to resemble a chair, tries to sit in it at the same moment she is concluding her side of the conversation, and promptly the chair collapses. All this time, Nick is watching with nothing but amusement and admiration all over his beaky face. He does eventually get up (there are protests from Nora) and helps her with the chair, which she then eyes with suspicion and does not try to sit in again.

These parts of old films really interest me. The congenial, witty way men and women were supposed to relate to one another. I've been trying to devise a way of making these small, black and white short films, with lavish costumes and strange sets, where that kind of wit could once again be demonstrated. Not with any other plot, just the casual, intimate, character driven moments that punctuate old films.
Posted by molly painter, esq at 12:23 AM