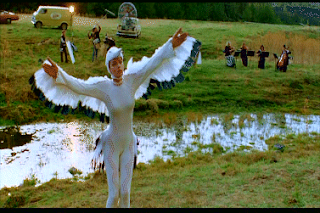 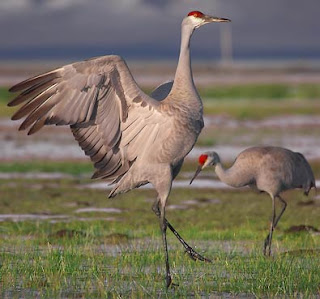 So, I admit it. I watch movies for the costumes. But I've actually never seen "Even Cowgirls Get The Blues," just read the Tom Robbins book of the same title. And when you google "Uma Thurman, Crane Costume" this is the ONLY image you get that actually fits the description. You'd think this movie never got made. And how could this not be a famous costume?

However, we do have a sandhill crane event happening around here. They generally fly over in the spring and fall- high black birds you hear more than see, and only if you are lucky enough to be out. But instead, because of the odd spring weather (?), they have been hanging out. You can hear their garbles almost anytime you're outside, which is amazingly comforting, as well as watch their incredibly awkward landings in fallow fields right next to the road.

The pelicans have also recently arrived, the magpies are looking resplendent and the goldfinches are mostly done with the moult. Must be, Must be, Must be spring at last! There are swallows, dammit! Finally!

Anyway, back to the readings, and hence why these musings are relevant.

I read "Even Cowgirls" as well as a lot of hippie fiction (back when I used to have time to read fiction) in high school. As such, I got a very jovial introduction to a lot of fairly serious and also some very not serious topics, (specifically race, gender, body image, animal's rights, sexuality, the environmental movement, mental health, reproductive rights, pharma fun, etc.) basically through 4 white male writers - Tom Robbins, Ken Kesey, Kurt Vonnegut and John Irving. And, honestly, I don't think they did a bad job of exposing me to the adult world I was about to enter. All their characters are complex, sympathetic, passionate and, more than anything, they are diverse. Especially with Tom Robbins and John Irving, it almost seems like they try to take as many outsiders as possible and throw them into an unpredictable situation. Very infrequently is there a true "evil" component to any character, everyone is believably motivated.

I also read Zora Neale Hurston, Toni Morrison, Alice Walker and August Wilson, but they just weren't as much fun. They were kinda preachy, and I just don't like preachy. Also, their characters weren't as, well, diverse as I was interested in at the time. They told a cultural tale, but without the same joyous pizazz, and thus didn't hold my interest.

So, I take some issue when people tell me that the reason I'm not as interested in the African American Experience as I should be (Talking Back, Bell Hooks, Race and Representation, Maurice Berger, Age, Race, Class, and Sex: Women Redefining Difference, Audre Lorde), or that I should appreciate the rants and raves of people because they have a different cultural background than I do. It's not the background I have a problem with, it's the approach.

I glimpsed Bill Cosby talking about Trayvon Martin yesterday on CNN. I'm far more interested in studying Bill Cosby than any of the readings we had to do. His records were brilliant at talking about the horrors of growing up Black in the 40s and 50s. Maybe he can't talk about being a lesbian writer, but he certainly talked about talking back. He certainly could poke fun at the ridiculousness of the white ideal body, not to mention the bizarre idea of male superiority.